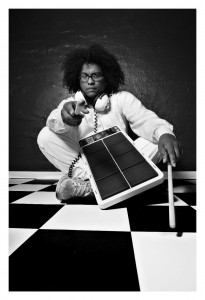 At the age of 12 his career initiates in the local group Folklórico Experimental Naza, performing at ‘El Nazareno’ in Casalta 2. Traditional rhythms like Parranda, Golpe Tocuyano and Fulia lead him to Gaitas, music typical from the region of Zulia. At the University ‘Central de Venezuela’ he stages the musical ‘History of Salsa’. Appearances with various groups and artists help to tap new musical horizons: Grupo Madera, Catatumbo, Diveana, Alicia Plaza, Hely Orsini/Los Cañoneros. With Criollo y Sabroso starts a new area of performances and recordings in his home country, surfacing his real vocation: multi-percussion

Based in Bogotá he carries out percussion workshops in 20 schools around the country. He gives lectures at the Universities ‘Central de Bogotá’, ‘Barranqilla y Manizales’ and ‘Uninnca’. He realizes two theatre performances ‘La Casita del Placer’ and ‘Crecencio’. Invitations follow from the Foundation Batuta of Bogotá to participate in concert and from Richie Gajate for a Lp percussion workshop

More than 2 world tours follow with Aterciopelados Nominated best rock band of Colombia and Latin America.
Nominated twice of the Grammy 1997
Nominated twice and winner of the Grammy Latino 2001.
Appearance in Unplugged MTV in Miami and singled out by The Rolling Stones magazine as one of the best 10 live bands in the world.
While touring in Argentina he records a CD with Cachorro López.
He formes his own latin-jazz band Casalta 2
You find him live on stage with

With ‘Watcha Tour’ he complemented bands like Molotov, Enanitos Verdes and Aterciopelados.

Multiple festivals and recordings take him to Argentina, Colombia, Dominican Republic, Germany, Spain and the United States of America.

Based in Germany he records his first album titled ‘Abriéndome los Caminos’. In Europe new perspectives open up.